I first met Dave McDonnell through a friend in the neighborhood. I needed a guy to do some general repairs around the farm—nothing big or glamorous but lots of it. I almost felt guilty when I first met him, describing the various tedious and basically crappy menial jobs that had crept onto my list over time. 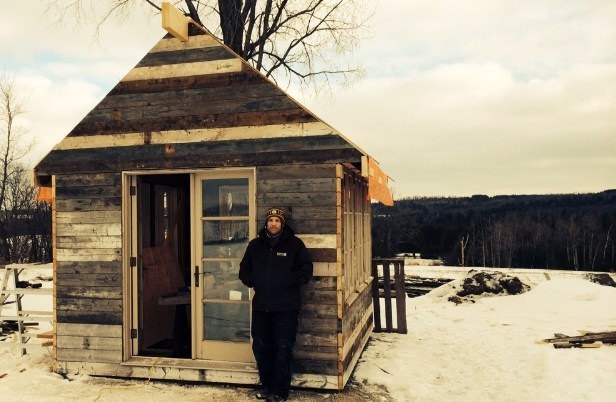 For one, Millie had broken the window in her goat palace with her horns. I (yes me) had replaced and glazed the glass, which of course looked terrible and needed redoing. I also needed him to nail down the loose boards in the barn, fix holes in the roof (which involved climbing up a ladder to do the caulking), string wire across the barn so we could hang works of art on it, fix the smoke detector that I had tried to repair but in the middle of the night would still beep annoyingly, and maybe see why Carlyle’s window seemed to allow winds to get through all around the seams. Oh, and the big question always on my mind: Why was the house so drafty?

By the time that he finished all the jobs, Millie had broken the window pane again. More glass, more caulking—it seemed to be a revolving door of crappy jobs. But honestly, Dave was amazing.

I’d call him, hoping I got a message machine. Or better yet, I’d email him so that I wouldn’t have to tell him directly to his face about the newly broken glass, or about more caulking being needed, or some other menial repair. (Dave was recently awarded the gold medal of all terrible jobs when he shinnied into the crawl space under the house to look for holes in the insulation. I can still feel the dust in my teeth when I looked at him after he emerged.) And he would just show up and do what needed to be done, with a sense of humour.
Then I discovered the real Dave, a guy I like to call the Renaissance man of Bethany.

Dave is not simply a door and windows guy as his card says, nor is he just a guy who can tackle pretty much any job I hand him with expertise and good humour. He is in fact a man of wide-ranging talents.

First, he has a climbing wall inside his house. As Carlyle said, “Mom, anyone that has that has got to be super-cool.” Second, he used to, and no doubt still does, the Tour de France road bike race. Then there’s the competitive rowing, which means that sometimes he can’t come over on a Saturday because he’s in some regatta on a river. He has a portable cappuccino maker that comes in a leather case, which tells me he is a man who is serious about his coffee.

Further evidence of his amazing abilities? When I was building the second kitchen, he asked me if I wanted to have concrete countertops, because (of course) he builds them in his spare time. And here’s the pièce de résistance: He is going to build a stone oven in his own back yard to roast coffee because that is just the kind of thing he does. In fact, while he was here at the farm on a cold day last fall, waiting for a delivery, he fired up the stone oven, built a makeshift roasting gizmo out of a piece of old tin roof and roasted some coffee beans. Not only did he pass the time enjoying a cup himself, but he left me a glass jar of freshly roasted beans to savour when I got home! Nice.

Apart from all of these hands-on skills, I’ve also learned that if you find yourself stuck in an idea, needing fresh approaches to guide you to fruition, just ask Dave, wait for a bit, and a creative solution will evolve. While he always laughs at my grand concepts initially, he does not mock—an important difference!

I imagine I’ll have plenty for Dave to do for a long time yet. Our new bar in the barn will be a joint renovation effort between gifted woodworker Shawn Cameron and Dave, who will make the concrete counter.

Finally, I want to note that as I write, with temperatures around -25 and blowing snow and ice making walking almost impossible, Dave is out in the field, building a greenhouse so I can grow wedding flowers. He’s constructing it from BC fir timber, metal, remaining barn flooring left on the fenceline and windows he had left over from another job. I know it will be another beautiful structure, not to mention the most amazing, creative greenhouse in the township, maybe in Ontario, maybe Canada.

Not surprisingly, the cold doesn’t seem to bother Dave much. Remember that terrible cold snap after Christmas? I didn’t see Dave for a while. Apparently he was out winter camping and ice climbing. Of course. 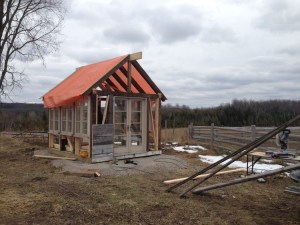 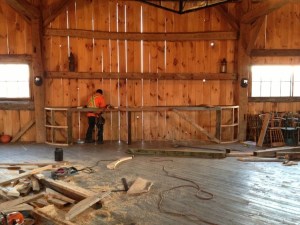 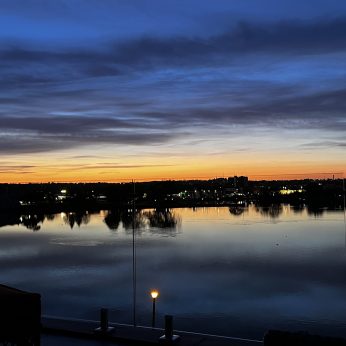