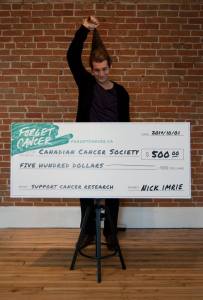 I was 16. Danielle was in her early 20’s. Nick was 24. These are the ages at which we all lost someone from cancer. The sad thing is, although this was the first time, it wasn’t (and likely won’t) be the last. If you have been to the farm for a wedding, you have undoubtedly encountered Nick, our Bar Manager Extraordinaire. He’s the one you will see behind the bar, mixing drinks, chatting with guests, and occasionally doing some flare bar tending if you can talk him into it. It is obvious that he is a fun-loving guy that leaves an impression on brides, grooms and guests alike, but more importantly, he has a giant and passionate heart.

Losing his grandfather just a few years ago prompted Nick to plant the seedlings for what has now blossomed into the Forget Cancer campaign. The founding principle of the campaign is, “everyone has been affected by cancer in some way and if it affects all of us, it will take all of us to make it stop and forget cancer ever existed.” In 20th Century Europe and North America Polio was one of the most feared diseases, but thanks to the development of a vaccine in the 1950’s we are lucky to live in a time where the disease has been practically forgotten about. Could you imagine a world where cancer is viewed the same way? Nothing but a historical disease that has never affected you or your family? That is what the Forget Cancer campaign is working towards.

“Everyone has been affected by cancer in some way and if it affects all of us, it will take all of us to make it stop and forget cancer ever existed.”

The ultimate goal is to raise $10,000 for the Canadian Cancer Society by December 20, 2014. A daunting goal for some it might seem, but that’s our Nick – an all-in, go-big or go-home kind of guy. He has been growing his hair for the last few years (and we’re not talking your average shaggy mane, we’re talking well past shoulder length locks that Tarzan would be jealous of!) and will be cutting his hair to inspire donations for the campaign and ultimately have it be turned into a wig for cancer patients.
Since we’re all one big family at South Pond, we would like to call on all of you to help us support Nick. There are several things you can do:

The Swallows of Summer

Wait… I’m Not Ready for Snow