How Millie Came to South Pond – Part I 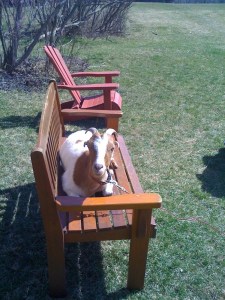 The way Millie the goat came into our lives was somewhat planned, somewhat spontaneous. Ever since moving up here to the country, we had always talked about having some animals. But like most people who had not grown up on a farm, we didn’t really know what that entailed. Feeding, early mornings, cleaning stalls and coops, vet bills, not to mention the expense and the fact that we would not be free to just pick up and go somewhere overnight.

The first animal into the fold was a dog. Our second dog, really—Lillie the Lab. We were driving home from the school bus when we saw a house with a sign on the front lawn offering Lab puppies for sale. It seemed like an omen because just that week, I had been thinking that our dog Mollie, who came with us from Toronto, needed a friend now that we were out in the country, away from the social opportunities of our urban dog park. (We still sometimes joke about her being a Rosedale dog who’s had to adjust to rural life.) We pulled a U-turn on 7a and went home with what seemed like the most docile, cuddly golden Lab.

Lillie nearly proved my undoing. A challenge to my training skills every day, she pushed me close to the edge. I had a special low, exaggerated voice for Lillie that now the girls tease me about. When I used The Voice, Lillie was supposed to listen to me and obey—to stop jumping on the furniture, or follow some other basic command. Instead, she would just wiggle and squirm and push over everything in her path, as I now know Labs are just born to do.

Today she is a pretty great dog, loving and loyal but purely motivated by food. To get her to this point took all of our energy and dog-whispering skills.

The next addition was some chickens. We drove to Perth, Ontario, to locate some Araucana laying hens and brought them home, dreaming of the breed’s beautiful blue eggs.

Then there was the joint venture with Denis Grignon, my friend and a fellow small-animal farmer (also a very, very funny man who earns his livelihood as a comedian) and what he called the “stinkubator.” We both had chickens and both had roosters and thought “Let’s try our hand at more chickens”; hence the small-scale incubator designed for people like us with a few eggs to hatch, not a big industrial set-up.

Denis used it for one hatching period and I for another. Hatching your own birds is a wonderful experience, for the kids but also for me! When the eggs were close to hatching I was on the phone to Denis constantly, my Internet browser open to “how to hatch chicken eggs at home,” the girls and me yelling back and forth, “Do you help them? What if the temperature moves down by a degree? What if one dies?”

We did manage to hatch our first bird—a rooster named Tom (after my brother; it was born on his birthday). My neighbour built a square box for the basement—yes, in the house—to contain the chicks until they were old enough, and the weather warm enough, that they could go out to the coop. As Tom grew, I felt terrible that he was cooped up down in the basement, so I bought a birdcage for him and hung it in a sunny window upstairs. I will never forget my first meeting with Shawn; he arrived at the house and asked me if that was a chicken hanging in the window. Chicken? What chicken?

Back to Millie. I would say that Olivia, my third daughter, who is now 14, is the most affected by animals of anyone in our family. Any time I have heard her panic or cry it has been when an animal is in distress. The first year we moved here—seven years ago now—Olivia lost all of her hair over the course of a couple of weeks.

She had had long, black, thick hair that literally swirled all around her like a windstorm. She was and is a very active girl, and her hair was an extension of that energy. Seeing this happen to Olivia was the most anxious period of my life, and of course I can’t imagine how it was for her. After all, our culture is mesmerized by constant images of perceived beauty, and for women much of the attention revolves around our hair. Losing it seemed like a cruel twist for her—for anyone.

I spent a year taking Olivia to doctors, homeopaths, Chinese herbalists, specialists of all kinds. But alopecia, as this condition is called, has no cure. Why it afflicts someone is mostly speculation. For Olivia, I guessed it was due to several reasons: stress, imbalance within her body, a reaction to issues in her life. I felt deeply that it was probably something I had done or caused. My relationship with her father was ending, I had moved her out of the city and away from the familiarity of friends and school to a place where she had to make new friends . . . I spent too much time thinking about all of those what-ifs.

Olivia very quickly adapted to life with no hair; despite having wigs and all sorts of hats, she chose to wear nothing on her beautiful head. She faces the world every day with strength and dignity and if anything, is a more powerful and dynamic young woman because of her hair loss.

Again, back to Millie. Olivia had wanted a goat for a long time. I though it was a crazy idea—why choose a goat? She had asked about it when we moved up. In the thick of chickens hanging from windows and new dogs, I brushed off her request and hoped it would not come up again.

In the first week of her new school, where Olivia was coping with having just lost all her hair, parents were invited to a meet-the-teacher-and-see-the-classroom evening. I arrived and wandered the halls where students had put up biographies of each other. I reached Olivia’s and read about the farm where she lived and all the different animals she had, including a goat.

What? She had told her friends she had a goat? That did it. I was feeling more apt to do whatever she wanted then—whatever gave her happiness. So off I went home and consulted with Shawn, who at that time was just a neighbour I barely knew, but who I thought would know about such animals and how I would find one. “Well,” he said, “do you really need more work?” Not really, but this was different—this was for Olivia.

His reaction was quiet and thoughtful—typical Shawn. His eyes did not betray whatever he might have been thinking. We got in his truck and drove down the road to a nearby farm where we paid the farmers and loaded up the most interesting goat we could spy. She was a mixture of Alpine and Nubian and showed traits of both: horns but no ears, her colours a combination of caramel brown and white. My barn at that time was barely standing; there was not much left of the walls but inside there was a little stall under the granary, and that is where Millie spent her first night.

Olivia was beside herself with excitement. She vowed to take care of Millie every day, getting up at 5:30 a.m. before catching the bus to school to feed her. And she did.
To be continued . . . 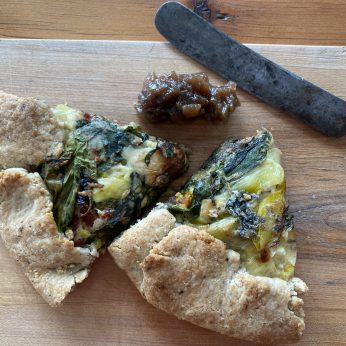 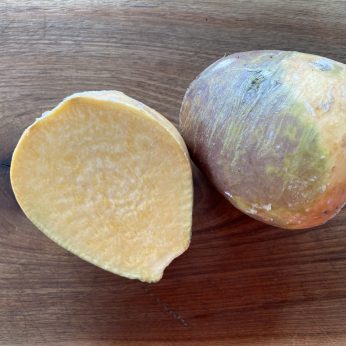 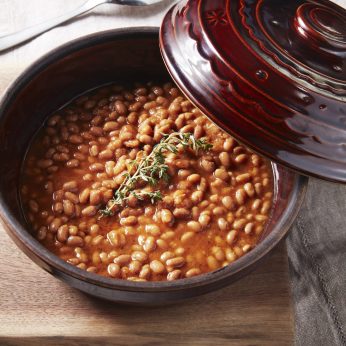