The humble leek and potato soup

For me, leek and potato soup is at the heart of the garden. It is a farmer’s soup, using very simple and fresh ingredients. Every ingredient can be tasted in this soup, whether it’s served warm or cold. The texture results in a velvety soup, making it an elegant first course or when served with croutons and topped with bacon, it can be a full meal.

This delicious soup has become a staple in my repertoire of things I cook regularly. Like an omelet that you make well, you can make it almost without noticing what you are doing!

Early leeks and fresh new potatoes make it a lovely cold soup in the summer, and if warm made with mature leeks and potatoes it’s comforting in the fall. Don’t underestimate its beauty and simplicity.  When used as an appetizer for a special dinner party menu, this soup is a hit, every single time.

My first introduction to this soup was from my mother’s “Mastering the Art of French Cooking Vol I“, by Julia Child. As a teenager being able to make something from this book, I was pretty pleased with myself. At that time I discovered that many of her recipes are not as complicated as one might think since she was using simple and fresh ingredients.

Leek is one of the most versatile vegetables around – it adds flavour and depth to all soups.

Poached and served with a mustard vinaigrette, warm baguette and a glass of white wine, leak, and potato soup is very French and so delicious.

Combined, they have a very delicate but distinct flavour. In my opinion, one shouldn’t substitute the leeks for onions in this recipe.

An important note is to give leeks a good wash as dirt often gets in between the folds.

For your potatoes, I like using the yellow-fleshed potatoes as they have a real hearty potato flavour and the two combined, make for a delicious soup.

In a medium-sized heavy soup pot, sauté the leeks in the butter until they are soft, about 2 minutes.
Add the potatoes, salt, and broth.
Cover and cook until the potatoes are done about 15 minutes.
Let cool slightly and blend the mixture with an immersion blender so as not to over blend the potatoes making them gooey.

Adjust the salt, add in the cream or milk, and add freshly ground pepper.
Serve warm or cold topped with chives or thinly sliced rounds of leek. 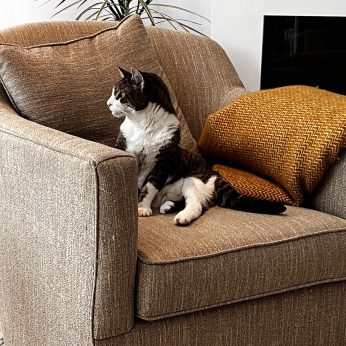 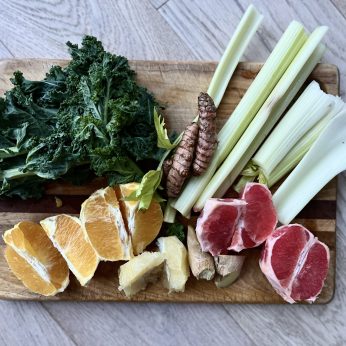 Juice it up this Winter!
Read More 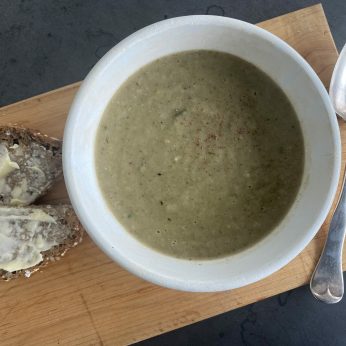