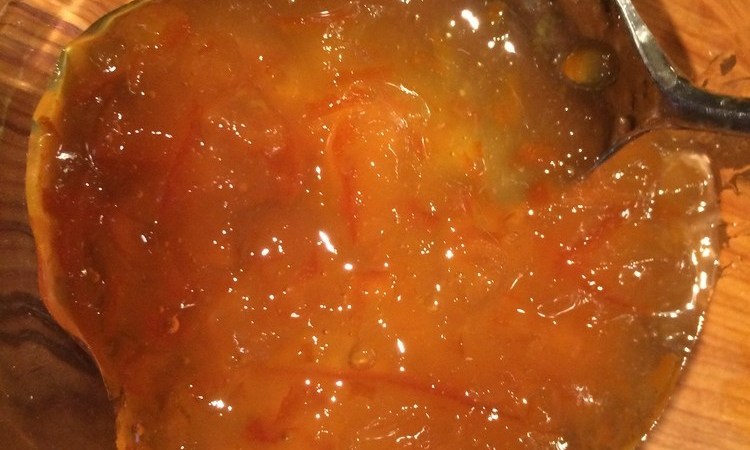 Making orange marmalade is that time of the year like picking strawberries in June, like ginger cookies in December, like a camp fire in August. It’s February, time for Seville oranges and time to make marmalade. Marmalade may be one of those acquired tastes. I know that when I was younger, it wasn’t’ my favourite, I did like to collect the stone ware jam jars from the jars that my parents bought from James Keiller & Son Ltd. Dundee Orange Marmalade. …I remember them as pottery like, and I’d put small change in them or barrettes. I’m not sure what exactly changed my mind. It may have been cooking with marmalade; slathering beautiful orange jam all over chicken for roasting or just seeing the gleaming dollop of orange on a perfectly toasted slice of home-made bread, butter and a and a cup of strong tea. It may also be because I gravitate to the sour and bitter over the sweet and marmalade has the perfect combination of both. The bitterness in the bits of rind floating in the delicious melting sugar.

I keep traditional in making marmalade. Wait for the Seville oranges to become available in mid February, sugar and a jigger of whiskey – I use Alberta Dark Horse – at the end. This part is not a necessity but it seems to add some depth to the marmalade. Whether you chose to spoon it onto toast or spread it over meat or just eat it out of the jar, marmalade is a delicious thing and making it is well worth the effort. Buy our marmalade in the summer months at the farm or look for our on line shop – coming soon!

To remove the back of the chicken – take a sharp mid sized knife and stand the chicken on a cutting board holding the legs in one hand. Grab the spine and take your knife and cut down along the edge of the spine being careful to stay close and not remove the meat from the legs or breast. Do the same on the other side. Throw the spine in a a pot with water (about 2 cups) and boil gentle for stock. Save this for another use. Take your knife and with the chicken skin side down on the cutting board, partially cut through the centre of the breast cartilage flattening the bird as you do this. turn it over, rinse under cold water and pat dry. You are ready to place it in a shallow roasting pan large enough to hold the chicken flattened down.

Rub olive oil on the chicken and sprinkle with salt. I use our lemon salt for added flavour. Take the 1/2 lemon and zest it sprinkling the zest evening over the bird. Take the remaining lemon and tuck it under the breast. Put it in the oven and set the time for 30 minutes.

At the 30 minute mark remove the chicken from the oven and slather the marmalade all over the chicken with a spoon. Put it back in the oven for 15-20 minutes or so until the chicken is done or 165. Let the chicken rest for a few minutes and then serve.

Roasted vegetables – I used 1 cup brussel sprouts, 1 cup red grapes, 1/2 a fennel. Slice the fennel and sprouts thinly and toss in approximately 1 tablespoon olive oil with the grapes. Place on a shallow pan or cookie sheet in a single layer and roast at 400 for 20 minutes. Sprinkle with salt and before serving I like to squeeze a little lemon juice over them as they come out of the oven. You can make this ahead of time and just heat for 10 minutes at 300.

Tips from my Mom